WE PROVIDE THE WARM AND PERSONAL SERVICE YOUR FAMILY DESERVES.

Nicholas F. Cognetta Funeral Home & Crematory takes great pride in what we do and the reputation we have built in the community.

Nicholas F. Cognetta Sr. and Naida E. Cognetta first opened their doors on May 15, 1953, and our funeral home has remained a family-owned and operated business ever since, in Stamford, CT. Our attention to the smallest detail ensures a flawless experience from start to finish, from our carefully selected lighting to our renowned makeup artistry, which ensures the kindest memory picture of your loved one.

Our staff specializes in many funeral services, allowing us to offer flexibility and competitive pricing that our customers appreciate. In addition to wakes, memorials and traditional services, we are the only funeral home in Fairfield County with a crematory on the premises. We also offer headstone monuments for your convenience. We are available to your family around the clock, and will gladly come to your home to make all of your arrangements if requested. 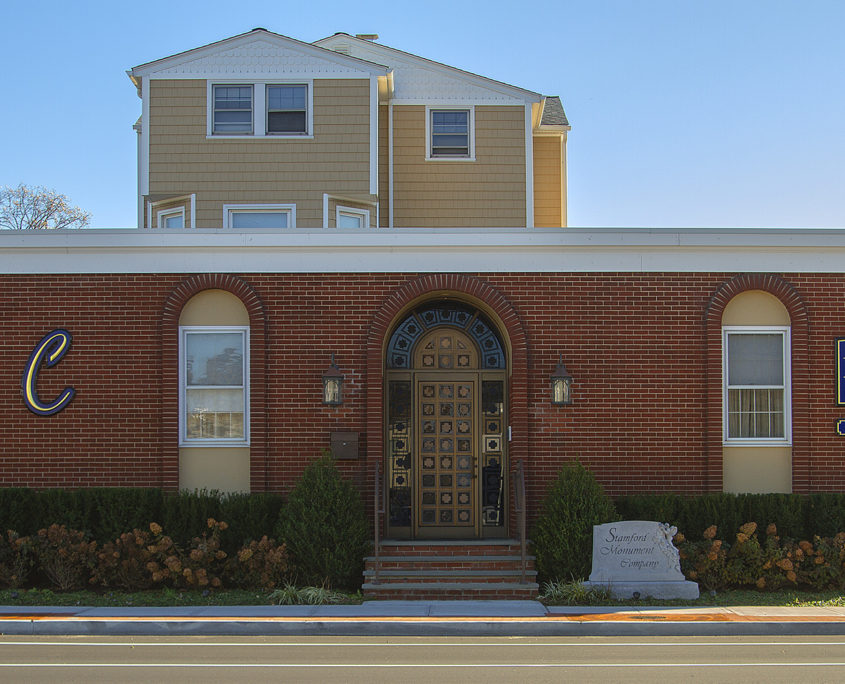 Nicholas F. Cognetta, Sr. 78, died at Stamford Hospital peacefully with his family by his side on Wednesday, August 24, 2005. He was born on April 22, 1927, the son of the late Pasquale and Angelina Loglisci Cognetta. He resided in Stamford all of his life, and attended local schools. He graduated from Stamford High with the Class of 1945. Nick played football under the late Paul Kuczo at Stamford High from 1942-1945. He then went on to Villanova and played under the late Jordon Oliver. He attended McAllister School of Embalming in New York City and completed practical work at Bellevue Hospital in New York and came back to Stamford where he completed a 24-month apprenticeship with a local funeral home. He became licensed as an Embalmer and Funeral Director in December, 1948. In 1953 he opened his family operated funeral home, the Nicholas F. Cognetta Funeral Home & Crematory, where he has cared for the families of Stamford ever since.

He was also co-owner of the former Temple Pharmacy, located on West Main Street, Stamford for over 20 years. He has served on many local charitable & fundraising drives. He was a member of the Christmas Seal Board, served on the Board of the Italian Center of Stamford where he served on many committees, including the running of Bingo for 10 years. He was on the Board of St. Camillus Health Care Center under the direction of the Diocese of Bridgeport since its opening in 1988. He served 4 terms on the lay committee of the St. Mary’s RC Church of Stamford and was a multi-term President of the Stamford Catholic Library. Nick served on the Board for the March of Dimes for several years and was also a member of the Stamford Kiwanis Club. He served on the Board of Directors for the Woodland Cemetery of Stamford, and was a member of the Knights of Columbus, St. Augustine Council #41, 4th Degree. He also held membership in the Gravinese Mutual Aid Society, and the Lega Arena-Dasa Mutual Aid Society. In August of 1999, Nick was made an honorary Police Chief of Stamford’s finest.

Mr. Cognetta is survived by his devoted wife of 52 years, Naida Cerreta Cognetta. He is also survived by his son and daughter-in-law, Nicholas F., Jr. and Elaine Cognetta, and their son, Chris; his daughter and son-in-law, Madelyn and Jay Pesci, Jr. and their children, Jake, Faith and Nicky; his daughter and son-in-law, Allison and Frank Gallagi and their children, Tessa, Frankie and Elliana; and his daughter and son-in-law, Barbara and Frank Duffin and their children, Gracie, Frankie, Caitin and Mally. He is also survived by his brother and sister-in-law, Frank and Tillie Cognetta; another brother and sister-in-law, Joe and Mona Cognetta, and a sister and brother-in-law, Maryanne and Bill Santora, as well as sisters in law, Rose Cognetta and Irene Cognetta , as well as several nieces and nephews. Besides his parents, he is predeceased by his brothers, Michael P. and Ralph “Jeff” Cognetta and his nephew, Pat Cognetta. A Mass of Christian Burial was celebrated on Saturday, August 27, 2005 at St. Mary’s RC Church, 566 Elm Street, Stamford at 10 AM. Interment followed at Lakeview Cemetery in New Canaan.

Naida Elizabeth Cognetta, 82, passed away peacefully at home in Fairfield, CT on Saturday, December 29th, while saying her nightly prayers. Born in Stamford October 13th, 1930, she was a daughter of the late Ralph and Gemma Galella Cerreta. Naida attended Stamford schools, having graduated from Sacred Heart Academy, “Class of ’48”. After a brief modeling career she studied to become a Laboratory Technician, working for Dr. Saul J. Jaiven, on Bridge St. in Stamford where she administered care to many Stamford families from the late 1940’s through 1960.

At the age of thirteen, Naida started dating Nicholas F. Cognetta, Sr., whom she would marry, after a long courtship, on September 1, 1952. Together with Nick, she would travel life’s journey, opening the Nicholas F. Cognetta Funeral Home in April 1953. Working along side her husband as a licensed funeral director herself, Naida originated the tradition of providing each family they served with a homemade pound cake, a tradition that continues to this day. Actively working, Naida and Nick raised their four children. When their business allowed, Naida and Nick loved to travel the world, both domestically and abroad. Nick Sr. pre-deceased Naida on August 24, 2005.

While her husband and family were the most important things in her life, Naida also found time to volunteer for The March of Dimes, having chaired many events and galas. As a certified interior decorator Naida decorated the Italian Center on Newfield Avenue in Stamford, for its dedication ceremony in 1968, which was attended by President Richard M. Nixon. She served as president of the Women’s Auxiliary and was an intricate part of many fundraisers and galas. In the 1980s Naida would become a Licensed Real Estate Broker, working on a new concept; conversions of apartment houses to condominiums. She and her partner, Jeannie Valentine, founded Camelot Realty, working together to sell both Hayes House and Fountain Terrace on Strawberry Hill Avenue in Stamford. Naida held her Roman Catholic faith most dear, and was a frequent communicant at virtually every parish in Stamford and, more recently, at St. Pius X in Fairfield. In her earlier years, Naida loved to bowl and was on many leagues, both couples and ladies leagues, in Stamford at Bowl-A-Rama, and in Norwalk, at Broad River Bowling Lanes.

A staunch republican, Naida was an avid watcher of Fox News. She was entirely fluent in current events and loved a good debate about politics and the goings-on of the world. Naida was always upbeat and positive, living gracefully and with dignity, despite her declining health and physical limitations. Naida leaves to cherish her memory her children, Nicholas F. Cognetta, Jr., and his fiancé, Denise Fumega and their children, Nicole and Danyel Meahan; of New Canaan, and his son, Christopher Richichi; Madelyn and Jay Pesci, and their children, Jake, Faith and Nicky; Allison and Frank Gallagi and their children, Tessa, Frankie and Ellie; and Barbara and Frank Duffin and their children, Grace, Frankie, Caitin and Mally, all of Fairfield. Naida also leaves her brothers and sisters-in-law, Rose Cognetta, Irene Cognetta, Joseph and Mona Cognetta, and Maryann and Bill Santora, Maureen Cerreta, and many nieces and nephews.

Besides her parents and husband, Naida was predeceased by her sister and brother-in-law, Madeleine and Richard Schlegel; her brother and sister-in-law, Thomas and Rosalind Cerreta; and her brother, Ralph “Junior” Cerreta; and her brothers-and-sisters-in-law, Mike Cognetta, Ralph “Jeff” Cognetta, Frank “Cheech” and Clotilda “Tillie” Cognetta. A funeral procession will leave the Nicholas F. Cognetta Funeral Home & Crematory, 104 Myrtle Avenue, Stamford, on Thursday January 3, 2013 at 9:10AM and proceed to St. Mary R.C. Church for a Mass of Christian Burial at 10:00AM. Interment will follow at Lakeview Cemetery in New Canaan, where she will be laid to rest alongside her husband in the Cognetta family plot.